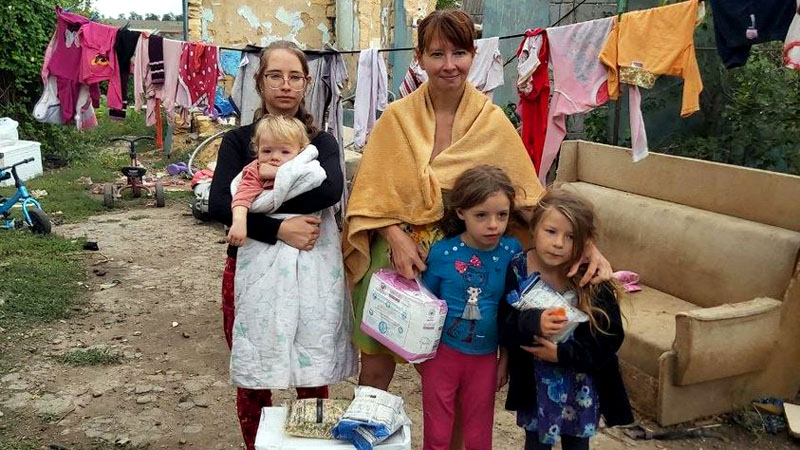 Living and preparing for winter in Odesa.

Irina and her seven children, aged 17 to just over a year, live near Odesa, Ukraine. Her husband works in a local store and her oldest son works odd jobs in the village to help his mother, but they still struggle financially. While the men work, Irina and her 15-year-old daughter do all the housework. In fact, when our team arrived, we found them canning for the winter.
When we asked how they were doing, we were amazed that Irina did not complain about anything. Instead, she showed optimism and confidence that she could take care of her children and give them everything they needed.
“We grew some vegetables all summer long for the canning, like cabbage, zucchini, beets, and some tomatoes. We also bought more with the money I had saved during the summer when I could sell some of the produce, so we don’t go hungry in winter. But, of course, I could not even imagine that I would get all this food from [you guys]! I was planning to use some of the canned food even now since we don’t have any other food, but thanks to you, we will have food for now and can leave the canned food for a long winter season," Irina explained.
We offered to pray for Irina and her family and she was very grateful. Then we said we included Scripture resources in the box, and her eyes lit up, “Oh, I will now sit in our only armchair after the long work days and will enjoy reading them.”
May God's Word speak to Irina as she reads Scripture and make a difference in the lives of each member of her family. Please pray for Irina's family and help others like her by giving. For every $50 contributed to our Ukraine Emergency Relief Fund, we can provide enough food for a family of up to five for a week, as well as Scripture resources.