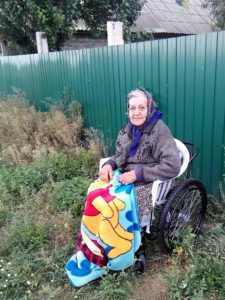 For many years, Svetlana worked on a collective farm in a small village in the Chernigov region of Ukraine. This was very challenging, because she was often in poor health, but didn’t have time to take care of herself. For 15 years, the only thing that kept her going was her dream of retirement. She longed to spend time with her grandchildren and have a small farm of her own.

In Svetlana’s words, “Life is so unpredictable.” When she was finally able to retire, her health worsened and she needed help with even the simplest of household tasks. Her husband lovingly cared for her, but sadly, he died not long after Svetlana’s retirement. His death was too much for Svetlana to handle, and she suffered a stroke, which left her bedridden. Since her children were working and unable to stay with her during the day, Svetlana just laid in bed all day, desperate to get outside of her house. Her children would sometimes take her outside, but she still never felt free. After the war broke out in eastern Ukraine, things only got worse for Svetlana. Not only was she trapped in bed, but she was also in danger.

The day that our School Without Walls (SWW) students brought Svetlana a new wheelchair from Free Wheelchair Mission was the day that her life was transformed. She was finally able to move around the house, go outside, and enjoy her newfound independence! At first, she was nervous about using the wheelchair, but when our SWW students returned just one week later, she joyfully greeted them and said, “I think I’m ready to pass my driving test.” Now, Svetlana is like a completely different person, and her newly regained freedom has inspired her to take better care of herself and improve her health! She is so thankful for her wheelchair, which she calls a wonderful gift.