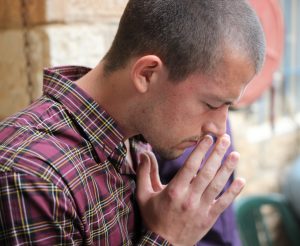 “I had dedicated myself to Satan and was involved in the practice of the occult from an early age. When I was only 14, I began to use drugs and then graduated to heavier drugs. I soon realized that I couldn’t help myself, even though I knew deep down inside that I should stop. My addiction to drugs was just part of a destructive lifestyle that involved immoral behavior, clubs, parties, women, and everything that the world could offer

“I ended up in a lot of rehabilitation centers over the years, and it seemed like there was no hope. But when I entered the Christian rehab center in Haifa, I somehow believed that things would be different. And they were! The Christian rehab center in Haifa actually served as a springboard to a new life that is now full of joy! It was here that God changed me from the inside out, and I saw myself through the eyes of my Heavenly Father for the first time.

“Miraculously, I did not experience withdrawal after using drugs for such a long time, but because I had been dedicated to Satan, he continued to dominate my thoughts and mind. This made the next three months in rehab very difficult. I realized that a process of change was going on, but it was extremely difficult and required great effort.

“Last August 27, I celebrated the one-year anniversary of deliverance from my addiction. I graduated from this difficult school, and now I serve Him. Now I realize that God can even use our mistakes for our good. It was difficult and it took time, but God has given me new life in Him! My parents and siblings now attend church together, and we are all rejoicing in our Messiah!”