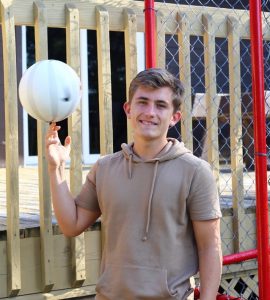 “My name is Roman and I was born in Israel to a family that didn’t know God. My father was a drug addict, and when I was only a few months old, he left my mother and me and moved to Eilat, Israel’s southernmost city. Later, I learned that he justified leaving by saying that he didn’t want his son to know his terrible father. In fact, I didn’t know my father was a drug addict for 10 years. I actually didn’t even know that he was still alive.

“When I was 10, my father called me for the very first time. He said, ‘Son, you don’t know me, but I’m your father. I’ve been a horrible father, because I’ve never paid attention to you, but I recently became a new person. God changed me.’ That was also the first time I ever heard about God. It turned out that when my father was dying on the street from a drug overdose, someone found him and took him to a rehabilitation center. Christians were visiting the rehabilitation center, and it was there that God transformed my father’s heart.

“That summer, my mother sent me to visit my father in Eilat. Even though she had already remarried, she still wanted me to meet my father. He took me to some of his Christian meetings, but I didn’t like them. I didn’t understand why people were praying, or what they were talking about. I liked their songs, but there was nobody else my age at the meetings, so I didn’t have anyone to talk to.

“Since that summer, my parents have shared custody of me. I confess that living with my father was often difficult. He kept bringing me to Christian meetings, and even though some people my age started coming too, I still wasn’t really enjoying them. I claimed to be a believer, but I didn’t even know what that meant. My father often told me that I wasn’t a real believer, because I didn’t know God, and that made me angry. I thought that because I knew a lot of information about God, it meant that I was a believer.

“My father, of course, was right. And one day, I realized that I was a sinner, and it completely took me off guard. I was hit by the terrible realization that I didn’t want my father to know that he had a terrible son. God kept knocking on my heart, and one day, I finally decided to repent of my sins! Not long after, I attended a summer Bible camp where we had a wonderful time of games, music, dancing, and learning about the Bible. Two of my friends, Alisher and Ruslana, were baptized with me in the Jordan River on the last day of camp. This was the best day of my life!

“I decided that in three months, I want to serve in the army and share my faith with my fellow soldiers. After my friends and I were baptized, five other young men also accepted the Messiah! Praise God!”