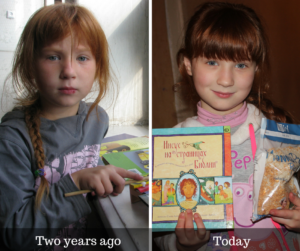 The Inessa that our School Without Walls students visit today is unrecognizable as the same child that they first met two years ago. Today she is full of smiles and loves to have fun, whereas two years ago at a refugee camp in Verovka, Ukraine, she looked completely different. She was scared of everything, her hair was messy, and she would mumble under her breath about bombings and the toys she had to leave behind.

Inessa and her family are originally from Yelenovka, a village located in the war zone in eastern Ukraine. Her parents were very involved in their local church, but sadly, after the conflict erupted and bombing attacks became more frequent, they were forced to flee the village, along with the rest of the congregation. They didn’t make it far, however, as the bombing attacks intensified, so Inessa’s family, and 26 other adults and children, were forced to hide in an underground bunker for three days. When they ran out of food and water, their pastor, Vadim, risked his life to retrieve his car so he could drive everyone to the village of Verovka. He had to make several trips, but he was able to get everybody there safely. After arriving in Verovka, Inessa’s parents, along with the rest of the congregation, turned an abandoned school into a refugee center.

Last year, our young Next Generation Christian leaders partnered with the Mennonite Center of Ukraine through our ‘I Care’ Refugee Assistance program to repair the center’s water supply and improve the rooms in which people were living. Along with providing these repairs, we also brought clothing, Scripture, and MannaPack meals provided by Feed My Starving Children to those living in the center, including Inessa and her family. Sadly, the center recently had to close, because the government demanded that those living there start paying for utilities, which they couldn’t afford.

After the center closed, Inessa and her family moved to the city of Belozersk, where her father found a job at a construction site, her mother works as a seamstress, and she and her older sister, Natasha, are going to a local school. Inessa’s parents make very little money, but thanks to the MannaPack meals that our School Without Walls students are bringing them, they are finding hope, even in the midst of the challenges they are facing.

In fact, because she doesn’t have to worry about having enough food, Inessa has already made many new friends at school, and she isn’t afraid of loud noises anymore. She still has bad dreams sometimes, but she says, “I don’t remember them, because I have even more good dreams, especially the one where I am swimming in the pond at my grandma’s house…One day, peace will come back to Ukraine and kids won’t have to hide in dark cellars anymore.”

If you would like to partcipate in bringing hope and practical assistance to families like Inessa’s, you can give online here: