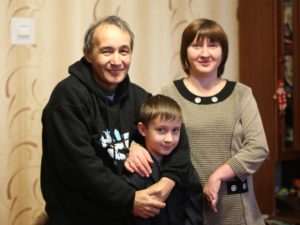 There are over one million internally displaced people and refugees in eastern Ukraine today, each with their own story. There is so much pain and tragedy there, but stories like Lena’s show that God is still working out His redemptive eternal plan of hope and healing, even in the midst of circumstances that seem hopeless by human standards.

Lena lives with her husband and son in a village near the front lines of the conflict in eastern Ukraine. When the war broke out, the family found themselves right in the middle of the violence. They were unable to sleep for many horrible nights due to the shelling, and Lena’s husband, Valeriy, witnessed several people die and had many missiles explode right above his head. When Valeriy began having psychological problems because of trauma and loss of sleep, the family knew it was time to leave their village. Recently, Valeriy also lost one of his kidneys and now needs to have dialysis three times each week. He is unable to work, so Lena cares for him and fetches water from the neighbor’s well since the family does not have their own water supply.

Between caring for her husband and 9 year-old son, Nikita, Lena still has time to love and care for many people outside her family. She volunteers at a local center for refugees, and she makes beautiful cross-stitchings, embroidery, and beaded artwork to bless others. The love of Jesus and the community of her local church sustain her during this difficult and challenging time. “Without God, I wouldn’t be able to do anything,” Lena shared with us. “I love Him with all my heart.”

Lena’s son Nikita is still struggling to recover from the traumatic violence he has witnessed and adjust to life in a new town and new school. The Christmas season is especially hard for him, which is why he was surprised and thrilled to receive a Gift of Hope box—filled with toys, treats, and a children’s storybook Bible—from Mission Eurasia last week for Christmas. Nikita shared with us, “This Gift of Hope was a reminder from God that although I don’t have many friends, the Lord Himself is my friend. He knows me by name and He enjoys blessing me through my other friends, like you.”

Lena and her family also received soup and nourishing rice meal packs from Mission Eurasia to help get them through the winter. “Thank you for blessing my family,” she shared.

We are humbled and blessed by the powerful testimony of Lena, whose faith in God remains strong despite much sorrow in her life. The way she so selflessly cares for her family and others is an example to everyone who meets her.

To provide critical relief aid, Scripture, and food packs for a family like Lena’s, please support our “I Care” Refugee Assistance Program, which is caring for thousands of refugees and families displaced from the ongoing conflict in eastern Ukraine:

Posted in Gift of Hope, I Care, Ukraine
DONATE