Tatyana, who lived in Gorlovka, Ukraine with her husband, Vitaly, and their two daughters, never dreamed that war would ever come to her homeland. After the fighting broke out in Ukraine, Vitaly felt called to defend his country, so he joined the army and left to serve in the war zone. Two weeks later, Tatyana learned that her husband had been killed in the fighting. She was shocked and couldn’t bear to break the news to her children, Nadya and Alina.

After receiving the news about Vitaly’s death, Tatyana and her daughters fled to the village of Granitnoye in the Donetsk region, where Tatyana’s mother lived. For the first four months after the move, Tatyana couldn’t find work, so she helped her mother with the household chores. Her family only survived because of the help they received from School Without Walls (SWW) students, who brought them humanitarian aid and warm clothing for the winter.

“Realizing that my life was falling into an abyss of hopelessness, I decided to read the New Testament that the SWW students gave me,” shared Tatyana. “I got so caught up in what I was reading, that I couldn’t stop! I also started praying for peace for my country, and prosperity, not only for my family, but throughout the world. And then God started communicating with me through the positive changes He brought about in my life. I believe that He will take care of us.”

After a while, Tatyana’s family started adjusting to their new home, and Tatyana got a job at a local shop. As of right now, they aren’t planning to return to Gorlovka until the war is over. “I am not the kind of person who is content with the bare minimum,” Tatyana shared. “I value freedom, and I want to be able to talk with anyone that I want whenever I want. I feel good where I am free, where my family is safe, and where there is no war. Many people from Gorlovka weren’t able to leave, and it makes me sad to remember that they are trapped there. But, I still want to say thank you for not forgetting about the people who are suffering and struggling to survive because of the war. In times like this, it is so necessary to preach the gospel to those in need, and it is especially important that young people like you keep doing this.” 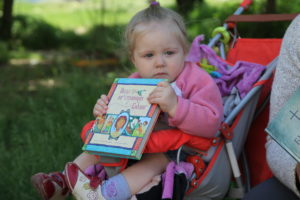