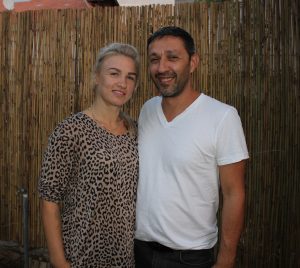 David was born in Georgia, but in the late ‘90s, he moved to Israel to escape the law after living a life of crime for many years. After moving, he began using drugs, but in 2010, when he felt trapped in addiction, he checked into the Living Israel rehabilitation center in Haifa. When he completed his four-month program, he enrolled in School Without Walls (SWW) and lived in a monastery for a year. During that time, he married Svetlana, who is also a former drug addict, and now they have two children together.

David served in ministry in Haifa for several years, but in 2015, he and his family moved to Rishon LeZion to start a new rehabilitation center. Since then, David and Svetlana have also started three home churches for about 30 people, and now they would like to start nine more home churches in their community so even more people may come to know Christ as their Savior. They are also actively involved in youth ministry.

Recently, David and Svetlana began meeting with Vlad and Irina, a young couple in their neighborhood. This couple was seeking forgiveness from their sins, and thanks to their friendship with David and Svetlana; they accepted Christ as their Savior! They are now expecting a child, and in January 2019 they enrolled in SWW in Haifa. They are also getting involved in ministry in their community, and they are actively serving at their home church.

“SWW was the foundation for my spiritual growth and my decision to follow the Lord,” David shared. “This program gave me a passion for ministry and set a high standard for dedication and service to my community.”

We are grateful for young leaders like David and Svetlana, who are having an eternal impact through their ministry to the lost people of Israel!