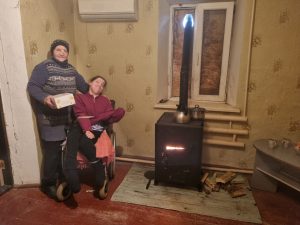 Yulia is 32 and has cerebral palsy. She has lived in her home village of Lezhyne her entire life and has never been anywhere else. When Yulia was born, her mother, Natalia, was devastated and tried to get help for her daughter, but after learning there is no cure, she accepted Yulia’s disability and did her very best to care for her only daughter.   When the war started in Ukraine, things became very challenging for this family. The Zaporizhzhia region where they lived was being shelled regularly. A few days ago, a missile hit close to Natalia’s home, and all the windows in their home were shattered. Another missile hit her neighbors’ house, leaving no survivors. Despite this ever-present danger, Natalia has just accepted this new reality, and continues to care for Yulia with no plans to evacuate.   School Without Walls leaders trained by Mission Eurasia and their partner Vladimir…

Viktoria—Gift of Hope in Moldova 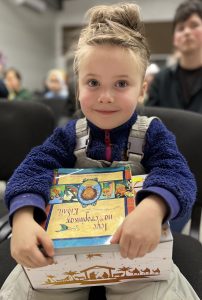 “My name is Oksana. I have had a disability since I was a child. I have two children, Viktoria, 5, and Vladislav, 12. We are from Mykolayiv and came to Moldova on March 20. So, we’ve been here for nine months. We’ve been living in the village of Ryshkova for the last six months. We have only one dream: for the war to finish and to be able to go back home and tightly hug my husband and my parents.    “We have been to many assistance centers for refugees. But when we came to your Christian center, we received what other centers couldn’t give us-peace for our souls, hope, and encouragement that nobody can take away from us.   “My children had such a wonderful day today, thanks to Mission Eurasia’s iCare team in Moldova. They took part in special Gift of Hope Christmas program for children and received gifts based… 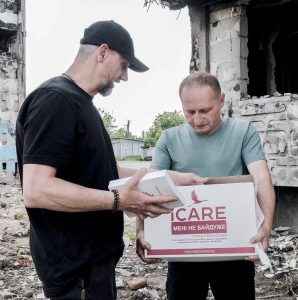 Borodyanka is one of the cities that the Russian troops came to “save” from peaceful lives, homes, loved ones, and life itself. Instead, the Russians left behind massive destruction and unbearable pain.   Victor was one of those who suffered from that destruction. The most amazing part is that he and his entire family (five people) were able to leave the town at the very last moment, right before the Russians entered and occupied the town. Unfortunately, he couldn’t take his beloved dog with them, and it didn’t survive.   Victor now shows others the ruins of his apartment that was completely destroyed.  He shares that his family was so happy and enjoyed life so much there, but that now it is all gone.  However, Victor is also very grateful that his whole family survived. He humbly received the iCare package from Mission Eurasia that his family needed so much. They now don’t have a… 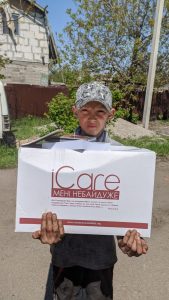 Sasha is from the village of Kam’yans’ke in the Zaporizhzhia region. This village has been under heavy attack from Russian forces and is almost in ruins. 93% of the houses are damaged and people can no longer live in them. On the other side of the village, people are so afraid of all the bombings that they don’t leave their cellars for days. No food has been delivered to their local store for a month now.   This is the village where Sasha lives. His mother is so traumatized by the war that she doesn’t want to leave her house, which is the only house on their street not in ruins. She hopes the war will finish soon and everyone will be able to go back to their normal lives. Sasha’s mother is a single mother with three children. Sasha is the oldest child, so he already feels the responsibility to…

Daria—Gift of Hope in Poland 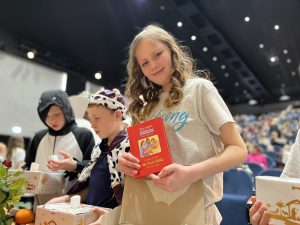 As part of the Gift of Hope children’s Christmas gift distribution in Poland, our Mission Eurasia iCare team in Warsaw went to the Osso Hotel to help 600 orphans from Ukraine celebrate Christmas. When the war started, they had all been evacuated to Poland from the city of Odesa, towns in the Odesa region, and Kryvyi Rih where they lived with 200 caregivers. So a total of 800 people evacuated together.    For these orphans, this was their first Christmas event, their first Christmas gift, and their first Bible. The Mission Eurasia iCare team engaged the orphans and made them part of the program, which was also the first time that most of these children took place in any show. The children showed genuine joy and delight during the program and especially as they opened their gifts, which contained toys, school supplies for writing and drawing, sweets, and a Bible…. 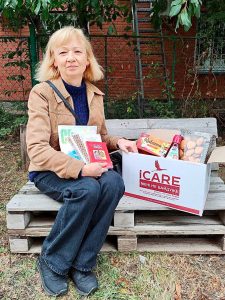 “My mom and I are refugees from Kharkiv. I had an apartment there and lived with my dog Chaki. My mom lived in another area of the city. I am 57. I worked in a store, looked after my mom, and enjoyed my life.  “On February 24, I woke up to the sounds of explosions and couldn’t believe that the war had started until I saw the tanks on our street. The first thought was about my mother. I quickly grabbed a couple things, my dog, and rushed to see her. Then life stopped. We had to spend 10 days in a cold basement, sometimes without electricity. Those were the scariest and hardest days of my life. I was really worried about my mom since she felt worse every day. During that time, my neighbor called me and told us something that was hard to process. Our apartment block had…